Now order your copy online at "Scholars without Borders" 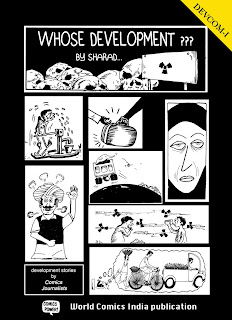 The genre of Comic Book journalism is a new effort by World Comics, a Delhi based outfit who are actively working to promote the idea. Grassroots comics - drawn by the affected parties in most cases- are used by activists for communication purposes in their respective organisation and area.

Stories from Jharkhand tell how Adivasis are being affected by big development projects and also about the Uranium mine radiation. The story from Assam shows fisherman's harsh life conditions while that from Goa is about tourism. From Kolkata comes the story of a slow moving tram and from Rajasthan, the plight of a Dalit.

The books are priced at Rs. 100 inside India and €8 outside India. In our General Books Section.

Posted by Sharad Sharma at 8:56 AM