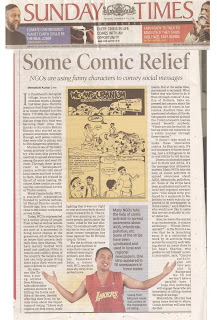 Meenakshi Kumar |The Times Of India


In Jharkhand’s Jaduguda village, home to India’s uranium mines, a change has taken place. Harmful uranium dust from the mines is no longer dumped into the fields. Till 2002, the villagers were not even aware how radiation from this dust was harming their lives. But thanks to Surendra Mohan Murmu who started an aggressive awareness campaign through wall poster comics, they were able to put an end to this dangerous practice.
Murmu is one of the many ‘comic activists’ in the country who uses this powerful medium to spread awareness among the poor and semi-literate. Through these ‘grassroots’ or ‘development’ comics, activists talk about local issues and how to tackle them. Most are trained in the art of comic making. Ofcourse, these comics are nothing like conventional Archie or Tintin comics.
World Comics India (WCI), a non-profit organization founded by political cartoonist Sharad Sharma nearly a decade ago, has conducted close to 400 comic workshops across India.
Today, WCI is represented by a motley group of people from urban as well as remote corners of the country, who are part of a movement to bring about change at the grassroots. All of them focus on issues that concern their daily lives. Says Sharma, “We have mainly worked with small and medium NGOs in remote and conflict areas of the country. We believe this tool can help people living there raise their voices and open a debate in society.”
So, someone like Tawna, a young activist from Mizoram, talks about deforestation and how it’s killing the fauna and flora of the area, thereby affecting their lives. Or, he tells them about the importance of voting. “I drew wall comics on this issue, highlighting that it was our right to vote and everybody should come forward for it. The result was amazing as many more people, particularly the youth, voted in the last election,” he recalls proudly. Murmu too is very active and his most recent campaign has been against the Bt Brinjal crop in Orissa.
For the activists, cartoons are a great medium to voice their concerns without resorting to protests and dharnas. Rajeshwari Saha, a trainer with WCI, would always shy away from protest movements. But at the same time, she wanted to be heard. What better way was there to do it than through comics? A native of Kolkata, Saha expressed her concern about the phasing out of trams in her comics. Another time, she questioned whether all the development centered around the Commonwealth Games would benefit anybody. “These are stories that hit us but we voice our concerns in a subtle manner through these comics.”
It doesn’t take much to make these innovative comics. As Sharma says, it’s not necessary to know drawing, just a willingness to do so and ability to tell stories.
Drawn on photostat paper and in black and white, it’s the message that ultimately matters. Many NGOs take the help of comic activists to spread awareness about AIDS, infanticide, pollution, etc. Some of the strips have been syndicated and used in local and regional newspapers. “One single strip produced by a sarpanch in Rajasthan on water scarcity appeared in 50 newspapers in three states,” says Sharma who would now like to make this service available in other states too.
Also, he wants the comics to go mainstream. A comics anthology – ‘Whose Development?’ – is the first in a series that he is launching soon. It is a collection of work by 15 activists from across the country, each talking about an issue close to his heart. Sharma, who prefers to call himself a comic journalist, says, “Comics anthologies are very popular in Europe and the US but we don’t have a parallel here. I hope this anthology will engage those who are interested in telling stories through drawings.”
Meanwhile, Murmu has many more stories to share. Comic activism will help him do that.
Posted by Sharad Sharma at 11:12 AM